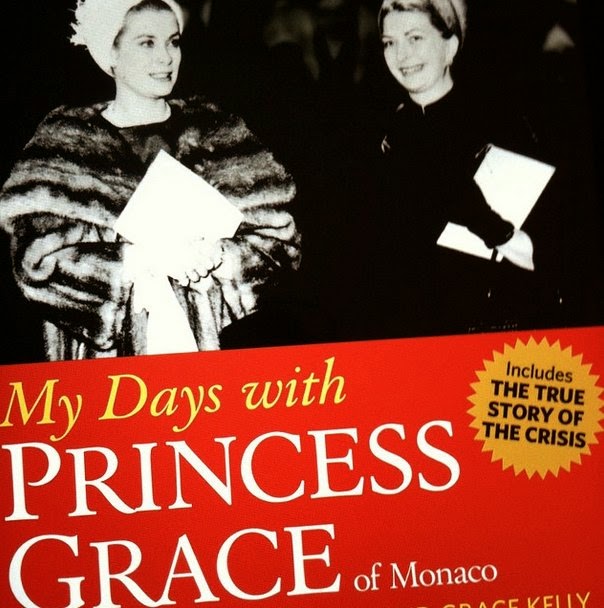 When it comes to royal biography, I appreciate a thoroughly-researched historical look at a royal’s life as much as anyone. But my real favorite kind of royal biography is the insider account: the descriptions of the daily lives of royals from those closest to them. Gossipy, yes — sometimes a bit unreliable, yes — but always incredibly interesting. Today’s book, My Days with Princess Grace of Monaco, is just one of those tomes.

The book is a collection of memories of Joan Dale, one of Grace’s closest friends from her years as a princess. Dale and her husband met the Grimaldis in the early 1960s, during the early years of their marriage. The Dales were living in France, where her husband was working with the American diplomatic corps, and the couples became close. Their children were of similar ages, and Dale suggests that Grace felt somewhat isolated in Monaco and was happy to find an American friend nearby.

Like Joan and Grace’s friendship, the book spans several decades, from the years when the Dales lived in Monaco (after Dale’s husband took a job working with Prince Rainier) to the end of Princess Grace’s too-short life. Dale was present at all of the major Monegasque society events of the early 1960s, and she describes Red Cross Balls and National Day celebrations, Christmas Eves and children’s birthday parties. The memoir paints an extremely flattering portrait of Grace, who is depicted as kind, caring, and devoted to her family and friends. Dale also provides rather amusing descriptions of the peripheral royal figures at the Monegasque court, including the dashing Prince Pierre, Rainier’s father, and the eccentric Maharini of Baroda.

But for me, the real delight of this book was its depiction of Prince Rainier. He’s always seemed sort of like a background figure to me, even though he was the sovereign of his country, probably because Princess Grace’s spotlight was inevitably so bright. But in Dale’s memory, he makes crepes in her small kitchen, drives capably through the hairpin turns of the Monegasque-French countryside, and gifts antique fireplaces to friends for their new home. Because Dale was also so connected to the political aspects of Monaco in the 1960s, courtesy her husband’s position at the palace, the book also gives an inside look at the tensions that existed between Monaco and France during that period. I absolutely loved getting to know Rainier a little better.

Grace, Rainier, and Albert on their last family vacation, 1982

The book ends on a poignant note, as Dale was invited along on the last family vacation that the Grimaldis (sans Stephanie) took before Grace’s car accident. Dale’s journal from the cruise is reproduced, providing glimpses at the family behind the glamor. Grace does aerobics on the ship; Albert dances in the disco; Caroline is thrilled when a stranger wants to talk to her but doesn’t recognize her. The deep grief of the family after Grace’s death is really underscored by this section of the book. It was so personal that I almost felt like an intruder, and it made me wonder if Albert and Caroline have read the book, and if so, if they approved.

Joan Dale actually died in 2005, the same year that Prince Rainier passed. The book was completed by her daughter, Pamela-Grace (who was also Princess Grace’s goddaughter). She has set up a website to promote the book; it includes some additional documents from her mother’s correspondence with Grace, as well as a sample chapter of the book. If you’re interested in reading, but you’re not sure you want to purchase, you’ve got the option to get a feeling for the book there.

But I have to say that I enjoyed the book immensely, and I’d definitely recommend it for those who are interested in royalty and in the Grimaldis especially. Hardcover copies of the book are currently on sale (Amazon has it for under $25). It’s also ultimately worth noting that it’s not the book that was used as the basis for the much-derided film Grace of Monaco. Skip the film and read this charming memoir instead.

Disclosure: I received a review copy of this book from the publisher. All opinions shared here are my own. Links to the book within this post are my affiliate links from Amazon; if you purchase the book through one of these links, I receive a small monetary compensation (which I use to purchase more materials for review for this site!).