The Earl and Countess of Wessex depart St. George’s Chapel after their wedding

Fifteen years ago today, a rather different British royal wedding was held at St. George’s Chapel inside the walls of Windsor Castle. The ceremony joined together the newly-minted Earl of Wessex, youngest son of Queen Elizabeth II, and Sophie Rhys-Jones. No balcony kiss, no enormous guest list, no London cathedral or abbey on the menu for this royal wedding, but the guests still managed to sparkle — especially the bride! Enjoy this Royal Jewel Rewind, featuring the jewels worn by the Windsors at the last royal wedding of the last millenium!
#82713929 / gettyimages.com

The Countess of Wessex

Ahead of the royal wedding, the same questions were asked that are always posed about a royal bridal tiara: will it be something borrowed or something new? Diana had something borrowed (from her family); Fergie had something new, purchased for her (eventually) by her parents-in-law. Sophie’s tiara, however, was something sort of in between. It’s made of four antique elements meshed into a new tiara. The official word from the palace on the piece is that it was from the private collection of the Queen, but that it had been altered by the crown jeweller.

Sophie Rhys-Jones arriving at her wedding, wearing a veil dotted with crystals

That’s all that’s ever been said by the palace about the piece. Jewelry sleuths on the internet, however, found a piece of evidence that suggests that the four elements of the tiara were originally a set of detachable diamond anthemions that could be worn on Queen Victoria’s Regal Circlet, which dates to 1858. A photograph was uncovered that showed empty places in the storage box for Victoria’s circlet that matched the shape of the anthemions on Sophie’s wedding tiara. None of the portraits or photographs of Queen Victoria wearing the circlet show the anthemions. Instead, she wore the circlet with alternating fleur-de-lys and Maltese cross elements. The circlet is no longer used at all; its diamonds were removed in the 1930s to make a new crown for Queen Elizabeth’s coronation, and the empty frame of the piece is in the Museum of London. 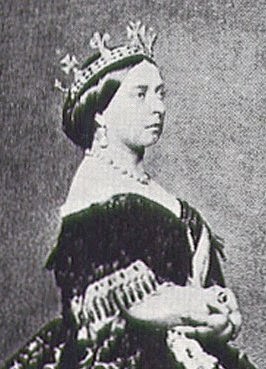 If the theory is true (and it hasn’t been either confirmed or denied), then Sophie Wessex received a new bridal tiara that had serious heirloom roots. It also meant that the Queen, who had already lost two daughters-in-law by 1999, was not handing over a significant tiara that could potentially leave the family later. And bonus: she was reusing pieces in the collection that had essentially gone unused since they were created a century and a half before. Canny!

The Earl and Countess of Wessex

The tiara wasn’t Sophie’s only accessory on her wedding day. She also wore a necklace and earrings designed for her by her new husband, Prince Edward. Both the pieces combine white and black pearls, and the necklace features a cross pendant. Her wedding ring was also new and, like the tiara, was also made by the man who was then the crown jeweller, David Thomas.

After the bride, the most important woman at any British royal wedding is, of course, the Queen. She and the other female guests had some rather interesting territory to navigate jewel-wise at this particular wedding. The wedding was at five o’clock in the evening — a time when day attire is still worn, including hats — but Edward and Sophie requested that women wear formal evening gowns and no hats instead. So what do you wear, jewel-wise — the diamonds you’d normally wear with your evening gown, or the pearls you’d wear at 5 PM?

The Queen struck a compromise by wearing her customary pearl-necklace-and-earrings daytime combo — except that they were the same pearls she wore to her own wedding 50 years earlier. And for evening flair, she added one of the blingiest diamond brooches she owns, the Williamson Brooch. (She also cheated and wore a feather fascinator. Paul Burrell, that problematic royal butler, reportedly sniffed that there was absolutely no way that HM “would appear in public before 6 without something on her head.”) 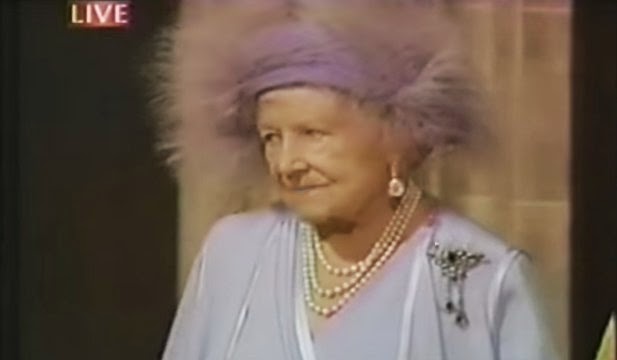 The Queen Mother arriving inside St. George’s Chapel for her grandson’s wedding (source)

The Queen and her mother obviously had a bit of a confab about the dress code, because the Windsor matriarch showed up wearing roughly the same jewel combination (and verboten hat) as her younger daughter. Three strands of pearls are paired with the diamond drop earrings from the Greville bequest. The stunning sapphire and diamond brooch, which features two pendant drops, was a wedding gift to the Queen Mum in 1923 from her mother-in-law, Queen Mary. The entire ensemble is recycled from her 80th birthday celebrations.

The public mainly glimpsed the Queen Mum at the wedding via the television coverage; just shy of her 100th birthday at this wedding, she sensibly skipped the group pictures on the steep steps of the chapel. (So did Princess Margaret, who was recovering after scalding her feet in the bath. You can glimpse her pearl earrings here.) Even so, the best story of all from this wedding involves the Queen Mum tossing aside her walking sticks to do the twist on the dance floor, much to the exasperation of the Queen. The woman knew how to party.

Princess Anne leaves the chapel, along with other royals and Sophie’s family

Looking through the photographs from this wedding reminds you how few senior royal women there were in Britain in 1999. Post-Diana, pre-Camilla and Kate, the other major senior royal lady at the wedding was Princess Anne. With her green ensemble, she wore a pearl choker with a bejeweled clasp (though apparently not the famous Marie Feodorovna choker from her collection), plus pearl earrings and a diamond floral brooch. Behind her, you can see her daughter, Zara, who wore a necklace with a diamond cross pendant.
#53507473 / gettyimages.com

One of the other royal ladies who you can spot in the photographs on the steps is the Duchess of Kent, wearing simple pearl jewelry and standing beside the precious tiny royal grandchildren, Beatrice, William, and Harry. You can just see Eugenie’s jacket on the right side of the photo. She might have been cropped out because she kept doing this:
#53507471 / gettyimages.com

Other guests are visible in photos that I’m not able to include here. Princess Michael of Kent wore THIS MAGNIFICENCE. The Duchess of Gloucester was elegant in old-fashioned pearls. Lady Gabriella wore a more modern twist on the pearl choker necklace. I’ve still not managed to spot either Princess Alexandra or Princess Alice, both of whom attended. And two foreign royal guests — Princess Alexandra of Denmark and Queen Anne-Marie of Greece — apparently snuck past photographers entirely.

But I’ll leave you with this rather charming photo of the families waving off Edward and Sophie as they embarked on their carriage ride through the streets of Windsor. This royal wedding may not have had the same amount of pomp and circumstance as the big London shindigs, but it wouldn’t surprise me if the weddings of the Queen’s remaining royal grandchildren (Harry, Beatrice, and Eugenie) look a bit more like this wedding. And that’s ultimately okay with me — as long as we still get to see a little bit of bling!