The votes are in for the first round of our Tiara Tournament, and today, I’m bringing you two posts with all the updates on the results! In this post, I’ve got results from the earliest match-ups…
The Girls of Great Britain and Ireland Tiara vs. The Strathmore Rose Tiara
In a battle between the overall number one seed and a rarely-seen floral sparkler, Goliath prevailed. The Girls of Great Britain and Ireland Tiara took a whopping 86.79% of the vote to win this contest, while the Strathmore Rose Tiara eked out just 13.21 %!
Queen Mary’s Honeysuckle Tiara vs. The Kent Fringe Tiara
This match was a close one. While the Kent Fringe Tiara pulled in a respectable 40.96% of the vote, Queen Mary’s Honeysuckle Tiara carried the day, winning with 59.04%!
The Lotus Flower Tiara vs. The Aquamarine Ribbon Tiara
While the Countess of Wessex is a much-loved member of the royal family, her tiaras didn’t fare well in round one of the tourney. The Aquamarine Ribbon brought in 26.5% of the vote, but the Lotus Flower Tiara advanced to the next round with a tidy 73.5%!
Princess Anne’s Festoon Tiara vs. The Teck Crescent Tiara
This contest pitted romantic design against family history — and romantic design won out. Princess Anne’s Festoon Tiara claimed 61.46% of the vote, though the Teck Crescent Tiara brought in a respectable 38.54%.
The Vladimir Tiara vs. The Belgian Sapphire Tiara
Queen Mary’s emeralds or Belgian royal sapphires? Emeralds it is! The Belgian Sapphire Tiara was beloved by 17.04% of the vote, but the vast majority — 82.96% of you! — went for the Vladimir Tiara to win this round.
Queen Mary’s Fringe Tiara vs. The Delhi Durbar Tiara
Two of Queen Mary’s signature tiaras competed to advance in this close contest. The Delhi Durbar Tiara won votes from 46.32% of you, but it was Queen Mary’s Fringe Tiara that survived to the next round, raking in 53.68% of the votes!
The Cartier Indian Tiara vs. The Persian Turquoise Tiara
Two tiaras with intricate designs were pitted against each other in this match-up. Ultimately, it was the Cartier Indian Tiara that prevailed, winning 69.53% of the votes to the Persian Turquoise Tiara’s 30.47%.
Queen Mary’s Lover’s Knot Tiara vs. The Wessex Aquamarine Necklace Tiara
I predicted that a royal icon would beat out a convertible modern piece in this round, and you all proved me right! The Wessex Aquamarine Necklace Tiara grabbed 17.63% of the vote, while Queen Mary’s Lover’s Knot Tiara was favored by 82.17% of you! 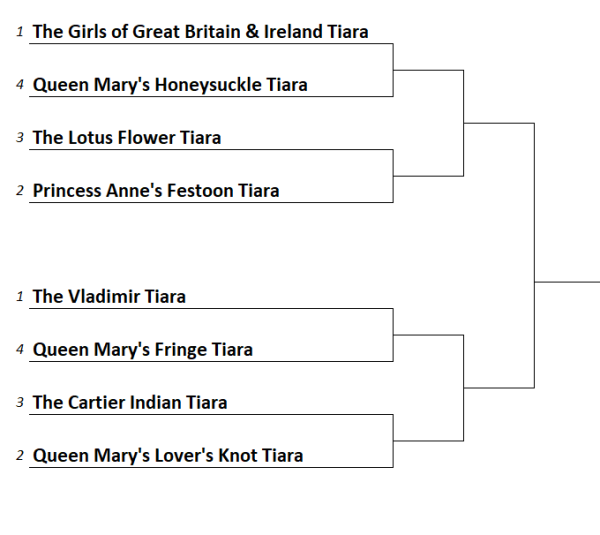 Here’s a look at the first half of our Sweet Sixteen contenders! No upsets — yet!
We’ll have updated results from the rest of the round one contests later today!